Researchers from CERI Energy and Environment have travelled to the remote Amazon forest to study how natural emission from the forest forms aerosol particles, which in turn impacts the climate throughout the basin. This understanding is increasingly important because the largest tropical forest in the world is nowadays strongly disturbed by deforestation, urbanization and a changing climate, and understanding its effects requires an improved knowledge of the atmosphere-biosphere interaction.

The project, called SONATA (Semi-volatile Organic Aerosols from biogenic precursors in the Amazon), is led by Dr. Joel F. de BRITO and has been funded by CNRS INSU through the LEFE-CHAT program. In a collaboration with Max Planck Institute (MPI), the team from IMT Nord Europe has deployed a mass spectrometer at the Amazon Tall Tower Observatory, a remote location only accessible by boat, in the heart of the jungle. The tower, shown in the photo below, has 325m, comparable to the Eiffel Tower, and is one the highest in the world.

The scientific team includes research engineer Marina Jamar and PhD student Carolina Ramirez. After the end of the 1 month campaign, in May 2022, Carolina will relocate to the second half of her thesis in Germany, at the MPI. So far the team has encountered lots of rain, one of the cleanest atmospheres in the world, and a rich wildlife including monkeys, agoutis, frogs, and insects, but no sighting yet of jaguars! 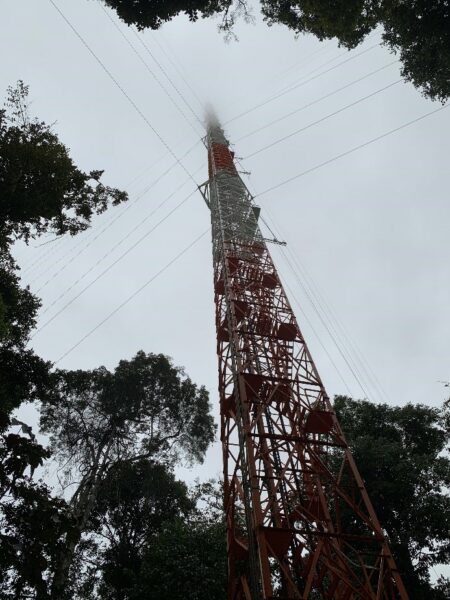